Skip to main content and our Accessibility Statement may be found in the footer of our website.
Our Response to COVID-19 & Important Visitor Information
Back To Home

On behalf of everyone at San Ramon Regional Medical Center, we welcome you to our hospital’s website. Please explore the site, where you will learn about all the high quality services and programs we offer. Personalized service and a patient-centered philosophy are distinctive qualities of our facility.

Thank you for considering San Ramon Regional Medical Center. We provide quality healthcare services, and we look forward to caring for you and your family.

Learn what makes us a Community Built on Care

China was the first country to enter World War II and was an ally of the United States at the same time they were resisting and escaping communism. During this tumultuous time, American music became the sound and beacon of freedom.

In May 2019, Francine Fitzgerald and her Chinese band – Arthur & Cool Cats – were invited to Taipei, Taiwan, to sing at two benefit concerts for WWII veteran families. The show is called “Memory Lane” featuring primarily popular American songs from the 50’s and 60’s with one exception 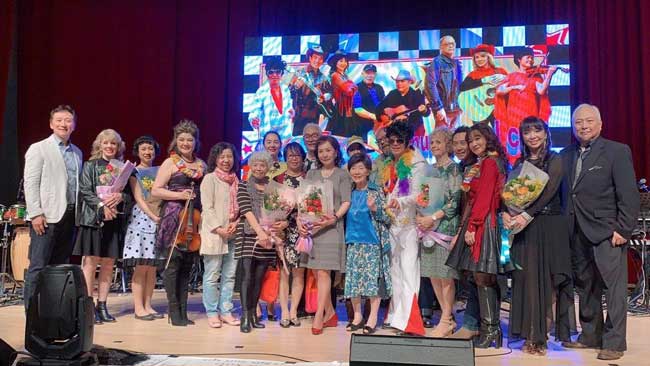 “Being the one Caucasian in an all Chinese band is a huge compliment,” said Fitzgerald, an Occupational/Employee Health Nurse at San Ramon Regional Medical Center. “I was first asked to sing this traditional Chinese folk song, In a Far Away Land, at the San Jose Chinese Cultural Fair a few years ago and then asked to sing it again at an international Chinese medicine conference, in front of Chinese doctors from all over the world. From there, our band was invited to perform in Taipei. Singing this beloved folk song in Chinese for the Chinese is a huge honor.”

The song is a touching story about a Chinese maiden who tends her sheep in a remote land when along comes a boy who sees her beauty.

“Connecting with people and making them feel good is what I like to do. Performing and nursing are a lot alike. It’s that heart-to-heart connection,” Fitzgerald said.

Fitzgerald has been singing, playing guitar and traveling with Arthur & Cool Cats for 15 years and a nurse for 35.